Over the past three years Planet Aid UK has supported Farmers club in Ecuador. 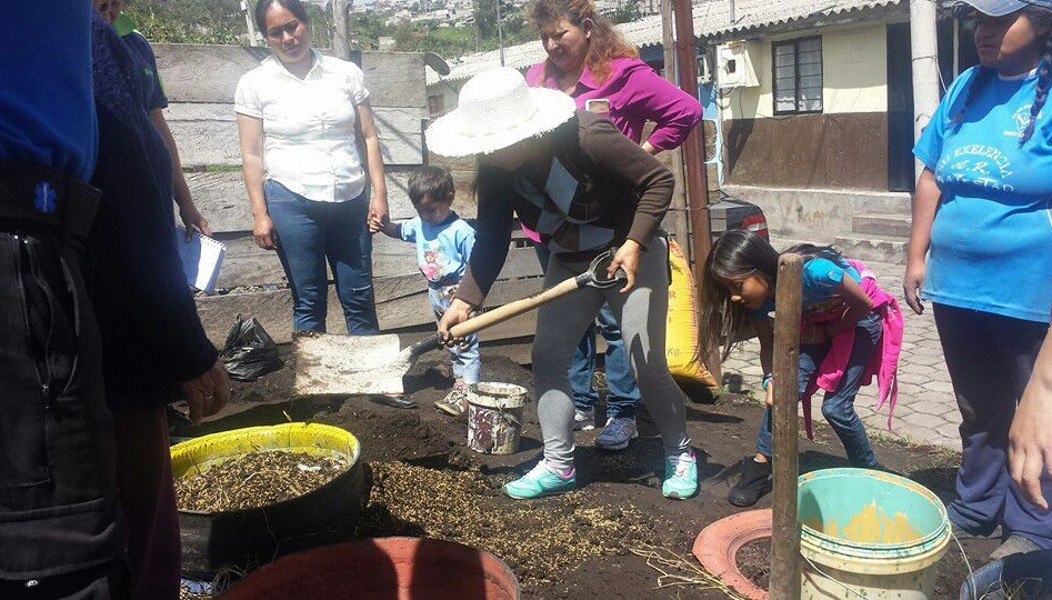 The aim of the project supported in 2016 has been to improve food security for female, heads of household, in the peri-urban neighborhood of Mariana de Jesus in the parish of Guamaní in Quito, Ecuador.

The aim has been attained through the implementation of three community gardens and a nursery. Not only vulnerable women from the community have been involved but also women affected by domestic violence that are living in the shelter “Casa Matilde” have participated in the activities. Ultimately, the project has also contributed to reducing the vulnerability of these women and their families. A marketing process for selling the products in local markets have been initiated and this guarantee the sustainability of the project as the female, heads of households, are willing to continue the gardens. The project has been implemented with technical support from the Metropolitan Economic Development Agency of the Municipality.

The impacts of the project have been very positive and we can highlight a feThe family members of the 29 participants have improved their eating habits and therefore their health conditions.

- The capacities of the participants in organic gardening have been strengthened.
- The households have increased their saving by reducing their spending on food as well as also established mechanisms for community savings.
- Participant’s integration and organization have been strengthened.
- Women, victims of domestic violence, have found productive activities that are helping them in their processes.
- It has set an example in the community and this has meant that other families have expressed interest in implementing similar actions, so the project has a multiplier effect.

Planet Aid UK has supported the Farmer's Clubs in Guinea Bissau with donations of over £14,440.
The figures on hunger paint a clear picture of the threat that hunger continues to place on the world and also illustrates why eradicating hunger and poverty is appropriately placed as the number one Millennium Development Goal.

Jacinto, 39 years old, owns a piece of land which he has been cultivating as his way of living for some years now. He lives in Oio, Guinea Bissau, the poorest region of the country, where 69% of the heads of families are illiterate and 60% of the children don’t attend school. His family consists of 14 members and most of the children participate in the production. If Jacinto were real, he would be the prototype for the 350 farmers who decided to join the Farmers’ Club Rural Energy in Oio in 2010, a project implemented by ADPP Guinea-Bissau. The aim was to take advantage of the huge agricultural potential to break out of poverty, in this case, by adding energy provision to the array of other activities the program provides and builds among the farmers.
The training of all the farmers was indispensable for the technical installations to work and to create awareness about sustainable energy. Besides that, they have been learning from each other, sharing experiences and resources and working together on the buying and selling of their products to obtain the best prices.
According to the project technical staff involved, the training of the farmers plays a crucial role in reducing poverty in Guinea-Bissau, one of the poorest countries in the world, where 60% of population lives under $2 per day, ranking 176th out of 187 countries in the UNDP Human Development Index for 2012. Even though the Agricultural sector employs 85% of the labour force in the country, the rural areas are still the forgotten ones and 94,3% of the population do not have access to electricity.