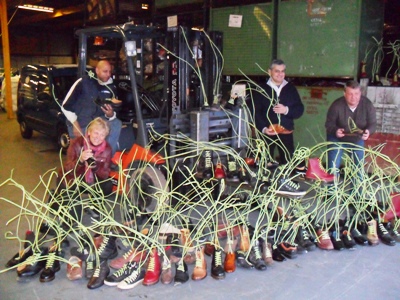 the FIELD art installation was installed in Planet Aid UK's warehouse. This installation was originally created by Dominic Wilcox and has formed an important part of the Global Footprint project in Northamptonshire as part of the Cultural Olympiad 2012.The installation consists of shoes which were donated to the project by a number of local companies, including Planet Aid. The laces are died green and threaded with thin wire which creates the effect of a field of green grass, symbolising the important role that the boot and shoe industry has played in the growth and development of Northamptonshire.

The installlation has been on display at numerous locations throughout the county and will become a permanent fixture at the Charles Bradlaugh PH in Northampton, a converted shoe factory, later this year.