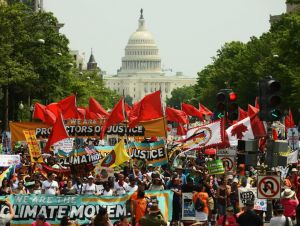 Hours after US President Trump announced that the US would pull out of the Paris Climate Deal, the French president Emmanuel Macron urged the world to work together. “It’s time we made our planet great again”.

It is worrying that one of the largest producers of greenhouse gases doesn’t want to be part of this historic agreement. ‘In a worst-case scenario the US withdrawal could add 0.3C to global temperatures by the end of the century’, the UN World Meteorological Organisation said.

500 US business leaders including Apple, eBay, Gap Inc., Google, Intel, Microsoft and Nike, have urged Mr Trump to stay in the Paris Accord. However much Trump ‘digs coal’ he cannot force companies to build coal-fired power stations if wind and solar energy are cheaper, which has proven to be the case in 2017. Instead, US states and cities will continue to pursue the green future that secures clean air, water and the promise of climate stability for their citizens. California and New York City combined would be the fourth biggest economy in the world. That is no small deal.

Climate change is, of course, a global issue but, around the globe, leaders from China to India to Russia to the European Union have lined up to reassert their commitment to confronting the greatest challenge faced by civilisation. Most remarkable is China, the world’s biggest polluter. China is determined to protect its vast population from the air pollution and its water/food problems that stem from carbon emissions. China is beginning to dominate the supply of renewable energy technology.

The US has been a major funder of climate aid programmes, which have been vital in winning over developing nations that view global warming as a crisis inflicted on them by industrialised nations. Billions more will have to be contributed by the richest nations, promised in the Paris agreement. Trump won’t contribute.

The breakthrough in Paris – getting the unanimous agreement of 196 nations to tackle climate change together – remains a solid foundation for beating global warming, a task that will take decades not years. The US abandoning the global climate deal brings risks, but the unity of the rest of the world and the plummeting green energy costs are reasons for hope.

To read an article on the future of energy written by Jesper Wohlert, who runs the Humana People to People Partnership Office in Madrid, please click HERE