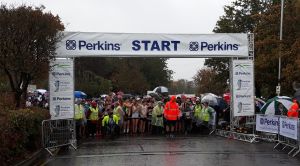 5,000 people registered to take part in this year's half marathon starting from the Embankment in Peterborough on Sunday 14th October. It was probably the wettest Great Eastern Run ever, but thousands of people still turned up and the atmosphere was fantastic.

Planet Aid UK was invited to join the event to pick up all the clothes people leave behind when they start running. To help with the collection we took along one of our branded collection vehicles (clearly displaying our name and logo), and a clothes bank into which the competitors could deposit their unwanted clothes.

Five volunteers from Planet Aid UK took part in the collection, handing out cards to spectators and encouraging them to use our banks located in and around the Peterborough area. Most people attending the event lived locally, but we also met some people from Leeds and even further afield.

The first event of the day was a 3½ mile Fun Run which started at 10am. A lot of families participated with children of all ages, some in pushchairs, also taking part. Many of the children were standing at the front, waiting for the signal to start and jumping to keep warm but still smiling despite the heavy rain. Next was a disabled run followed by the half marathon in which what seemed like an endless number of people took part.

When they reached the Finish Line a couple of hours later all the competitors were given a t-shirt and some refreshment. It was a great day and we did manage to collect some clothes (albeit all of them soaking wet), but the main objective for us was to be involved and to promote our work.